How will the roundabout affect the traffic flow?
Because approaching traffic only has to yield to vehicles already circulating in a roundabout, movement is often without delay. As proven with the roundabout at the Rupert Road the Memorial Avenue intersection, traffic moves through an intersection at a much higher rate than traditional intersection controls.

Are roundabouts safe for pedestrians?
Yes! Many studies have shown that roundabouts reduce a pedestrian's risk of being involved in a severe collision.

Is the cost of constructing a roundabout more than a traditional intersection?
Roundabouts can be less expensive than traffic signals, particularly in the long run. Generally, the initial cost does not differ, but in the long run, roundabouts cost less than lights less due to no maintenance costs. As well, because traffic moves through a roundabout in a very efficient manner, it is possible that streets between roundabouts can operate well with fewer lanes, providing a savings in associated construction costs. The roundabout at Rupert Road and Memorial Avenue is an example of this solution.

Is the roundabout being built out into the ocean?
No. The roundabout does not extend into the ocean and will not interfere with the foreshore. A more natural estuary for Beach Creek has been re-established on the foreshore that will enhance fish access, restore the salmon habitat, cleanse stormwater and increase resiliency to extreme weather events. The Town of Qualicum Beach is working with the provincial and federal governments as part of the required permitting process, to ensure no environmental degradation, and ensure a positive impact on the environment.

How long has the Town been planning this project?
In 2009, the Town of Qualicum Beach adopted the Cycling Plan and in 2013, the Age-Friendly Transportation Plan. A roundabout was rated highly in priorities, due to the significant safety benefits and the high volume of traffic and significant pedestrian activity

The Memorial Avenue and Highway 19A intersection is our highest crash site based on ICBC data. This area was also the site of a multiple pedestrian fatality in recent years, the stop-controlled Memorial configuration provides an extremely low level of service to vehicle users on Memorial attempting to make a turn onto 19A westbound, the intersection contains only a pedestrian warning device (it is not considered a traffic control device by the RCMP), and a traffic light is statistically more dangerous from a bodily injury point of view. Through the Waterfront Master Plan public engagement, this intersection was identified as being the start of the central waterfront, would benefit from traffic calming, and that Highway 19A should not be treated as a highway through this area. 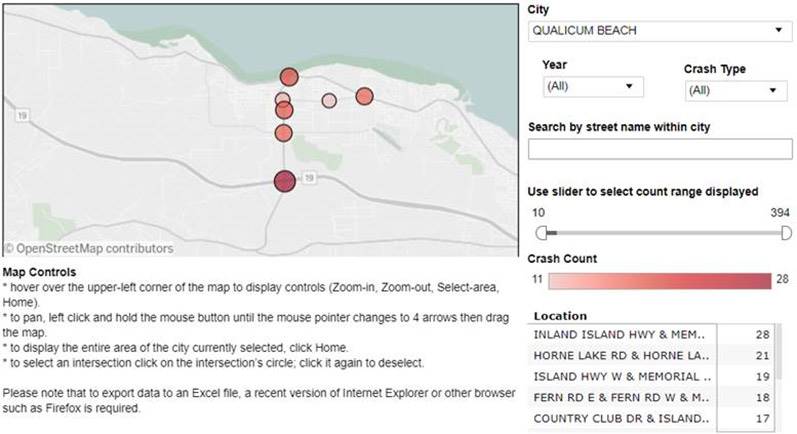